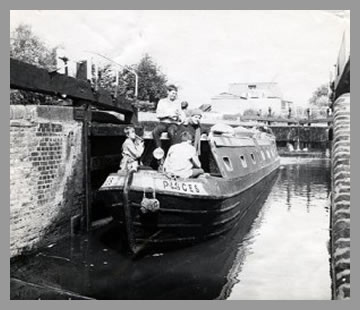 Hillingdon Council acquired ‘Pisces’, a former working boat, for use by their Youth Service as a camping boat during the 1960’s. The Youth Service also acquired an adventure base in North Wales and a sailing base in Harefield. Throughout the borough there were a number of other community facilities, workshops, theatres youth clubs etc. all of which were maintained and managed by council employees.

All of the facilities enjoyed council support and most expanded their provision. The narrowboat service commissioned the building of two 50 foot boats to meet increasing popular demand .

Pisces was upgraded by fitting a wooden cabin and providing permanent bunks and a fully equipped galley area. One of the 50ft boats ‘Gemini 1’ was similarly fitted out as a motor boat and the other ‘Gemini 2’ was left open as a camping boat to be towed as a butty.

The use of the boats was primarily aimed at the youth service but gradually extended to all community groups including local scouts and other community organisations. Adult groups began to use the boats for day trips whilst the younger groups went on residential trips. circuit cruises were popular with the youth groups wherby the boat would travel far and wide throughout the country and the youngsters were transported by council vehicles to spend a week or more on different canals.

The staffing of the boat service was provided by the council and comprised a project Organiser, two boat men or general assistants, and administration was done by staff in the council’s youth service. Leaders of groups were invited to be trained as steerers so that they could take out their own groups. For any group without a Hillingdon trained steerer, the council narrowboat staff would take them out.

Maintenance was carried out by council staff and local contractors and came from the youth service budget. Charges were levied for use of the boats to recoup some of the running costs but the general council ethic was to keep the costs for the users at a minimum so that those on limited income could have the experience of using the canals.

The primary emphasis of the narrowboat service was to educate and assist in social development. To that end the project organiser was a qualified teacher, all staff were employed by the youth service.

During the Mid 1980’s when councils began to suffer budget cuts, the youth service facilitated the formation of groups of volunteers to continue the operation of the various centres, managed by a Youth Service organiser. For the Narrowboats the volunteer group was primarily formed by people who had become trained as steerers. They took on the administration tasks, shared the steering for other groups and were directed to liaise with the Project Organiser. Later they were urged to form into a registered charity and then to manage the Project Organiser, eventually taking on the complete operation of the boats.

Thus the Hillingdon Narrowboats Association was formed and has continued to operate the narrowboat service. The 50ft boats were sold and a new 70ft was built. An additional 70ft boat equipped for wheelchair access was funded by the Stockley Park Development group which gave us three 70ft boats and made day trips for people with mobility problems easier.

The Association (HNA) became a registered charity and continues to operate the boats without funding from the council. HNA now has to exist on donations and revenue from boat use.

The Association became a registered charity and continues to operate the boats without funding from the council. HNA now has to exist on donations and revenue from boat use.

Today, HNA  have Six boats: Pisces our flag ship, Star, Spirit (our wheelchair accessible boat), Théo and Merlin, all these boats are full length i.e. over 70’ long and sleep up to 12 passengers. We also have Reg named after our treasurer who left us some money when he passed away, this is a day boat suitable for day trips and less experianced users.